Why does our hair go grey?

Several researchers believe that they have identified the mechanism for why our hair goes gray with age. The graying of human hair has been a subject of intense research since ancient times, and reactive oxygen species have been implicated in hair follicle melanocyte apoptosis and DNA damage. It’s generally thought that DNA damage that accumulates during aging is a likely cause for graying hair. However, nobody was able to show that this is the case. Hair follicles are very deep under the surface of the skin and therefore it is very unlikely that DNA damage is caused by UV radiation from sunlight. Two research groups reported in 2009 new results that shed light on the mechanism of this process. The first group makes the accumulation of hydrogen peroxide responsible for this process. The second group concluded that “genotoxic stress” depletes the melanocyte stem cells (MSCs) within hair follicles that are responsible for making pigment-producing cells. However, both findings could be two sides of the same coin. A depletion of cellular antioxidants that help to keep the repair mechanism of a cell going may occur over time.

Wood et al. in 2009 showed for the first time by FT-Raman spectroscopy in vivo that human gray/white scalp hair shafts accumulate hydrogen peroxide (H2O2) in millimolar concentrations. Furthermore the scientist found that three proteins, catalase and methionine sulfoxide reductase A and B, were almost absent. The functional loss of methionine sulfoxide (Met-S=O) repair in the entire gray hair follicle was also observed. Met-S=O formation of Methionine residues, including Methionine 374 in the active site of tyrosinase, limits enzyme functionality leading to a gradual loss of hair color. In addition, the researchers found that under in vitro conditions Methionine oxidation can be prevented by L-methionine. The data suggest that H2O2-induces oxidative damage in the entire human hair follicle. They reasoned that this could be the cause for senile hair graying and that these findings could open new strategies for intervention and reversal of the hair graying process.

Emi Nishimura and colleagues, also in 2009, investigated the role of ionizing radiation and other chemicals for their ability to induce DNA damage on pigment stem cells called melanocyte stem cells (MSCs) in mice. All the DNA damage they were able to study resulted in premature graying in mice.

DNA damage normally initiates apoptosis or cell cycle arrest in normal cells. Curiously the stem cells didn’t die and the DNA damage appeared to force MSCs into terminal differentiation. The cells therefore lost their ability to continue to replenish pigmented cells. Differentiation like apoptosis or senescence is a protective mechanism and cells that have been subjected to DNA damage have a higher likelihood of becoming cancerous. The researchers concluded that these results indicate that graying could simply be the body’s mechanism for removing damaged stem cells before they have a chance to become cancerous.

The researchers concluded that “genotoxic stress” that does damage to DNA depletes the melanocyte stem cells (MSCs) within hair follicles that are responsible for making pigment-producing cells. Rather than dying off, when stressed, these stem cells differentiate, forming fully mature melanocytes themselves. One might conclude that anything that can limit the stress may stop or slow down the graying process.

Figure 1: A schematic for the MSC fate analysis with or without IR at telogen phase (Inomata et al., 2009). 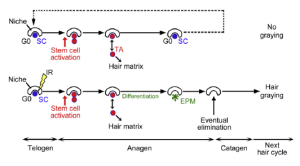