Why should I determine the identity of my cell line?

The solution is here !

The best tools a molecular biologist can have are:

A set of pipettes and a good brain.

Don’t underestimate the risk for your cell line to be contaminated or even be the wrong one!

Do you know if you are working with the correct cell line?

Cell line authentication and identification or verification analysis may just be the right choice for you.

Contaminations or overgrowth of cell lines have been well documented. However, this phenomenon is often ignored. The science magazine reported in an article published in February 2007 that Reinhard Kofler when he was a postdoctoral fellow received a cell line from a collaborator that was considered to be a human cancer cell line. He reports that he and the lab personal worked hard to culture and clone genes into the cell line. Finally they decided to genotype the cell line. In doing so they discovered that it was 100% mouse. So they had worked with the wrong cell line for a long time. Just typing the cell line prior to starting the project would have saved them a lot of time and money.

On the nature of cells

According to modern phylogenies living organisms are divided into three basic groups:

Eubacteria and archebacteria are both considered as prokaryotes. The use of molecular markers to measure differences in the cells for these groups showed that prokaryotes have significant specialized metabolisms but limited multicellular organization. More info on the modern view of animal phylogeny or the “Animal Tree of Life” can be found in two recent papers by Maximilian J. Telford in the Journal Science (published in 2013) and Gribert et al. published in 2007. Biologist now think that the split between eukaryotes and prokaryotes must have occurred after the basic mechanism of DNA replication, transcription, translation, the codon table, energy metabolism, and biosynthetic metabolism were established, since these are shared by both groups. See John Gerhart’s and Marc Kirschner’s book on “Cells, embryos, and evolution, published by Blackwell Science in1997. Scientists have estimated that approximately 50% of the genes from the bacterium Escherichia coli, commonly found in the mammalian gut, have eukaryotic homologs. This suggests that many core functions must be shared between prokaryotes and eukaryotes. Characteristically eukaryotes, such as mammals including humans, are complex multicellular organisms that have compartmentalized cell functions. Nucleus, mitochondria, chloroplasts, and others are separated by membranes from the other parts of the cell. Most eukaryotic genomes are larger and more complex than those of prokaryotes. Oddly, the size of the different genomes does not appear to be related to genetic complexity. The discovery that the genomes of most eukaryotic cells contain not only functional genes but also large amounts of DNA sequences that do not code for proteins solved this puzzle. The result is that the thousand fold greater size of the human genome compared to that of E. Coli is not just due to a larger number of human genes.

At the molecular level a gene can be defined as a DNA segment that is expressed to yield a functional product. The final product can be either RNA or a polypeptide. Some of the eukaryotic noncoding DNA can be accounted for by long DNA sequences that lie between genes. The gene structure in eukaryotes has been found to consist of split structures in which segments of coding sequences, called exons, are separated by noncoding sequences called introns. When the entire gene is transcribed to yield a long RNA molecule the introns are removed by splicing. The result is that only exons are used to produce messenger RNA (mRNA). First discovered in 1977 by Phillip Sharp and Richard Roberts when studying the replication of the adenovirus, the functions of introns was not known, but molecular biologist have made progress in unraveling what the introns are doing in an organism. Scientists now appreciate their involvement in a broad range of functions such as the encoding of functional RNAs and in almost every step of mRNA processing. The great diversity of introns as well as the nature of their functions is still under investigation today. Furthermore, DNA sequencing studies have demonstrated that mammalian genomes contain some genes that are chimeras of exons derived from several other genes and that other genes are repeated many times. During DNA re-association studies Roy Britton and David Kohne discovered that mammalian genomes contain repetitive DNA sequences as well. It is estimated that approximately 40% of mammalian DNA consists of highly repetitive sequences, some of them maybe repeated 105 to 106 times. Some part of these sequences may play important roles in the chromosome structure. Several types of highly repeated sequences have been identified. Two major types of repeated sequences are found to be present in mammalian genomes.

Illustration or visualization of different genomes 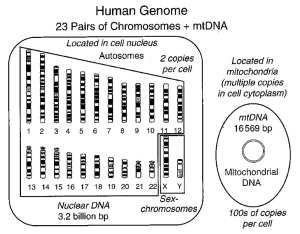 The human genome present in every cell consists of 23 pairs of chromosomes. In addition each cell also contains mitochondrial DNA as a small circular genome. Chromosomes are numbered according to their relative size. Chromosomes 1 to 22 occur in single copy pairs within a cells nucleus. One copy is inherited from ones mother and the other from one’s father.  Sex chromosomes are either X, Y for males or X, X for females. Human mitochondrial DNA (mtDNA) code for only 37 genes and contain only about 16,600 base pairs. mtDNA is inherited only from the mother. Nuclear DNA contain over three billion base pairs (bp).

Where to cell lines come from?

The HeLa cell line, sometimes also called Hela or hela cell line, is the oldest and most commonly used immortal cell line. The cell line was derived from cervical cancer cells taken on February 8, 1951 from Henrietta Lacks, a patient who eventually died of her cancer on October 4, 1951. This cell line is used in cancer research and is remarkably durable and prolific and it was found that it contaminated many other cell lines used in research. This has been published in several articles and in different scientific journals. HeLa cells proliferate abnormally rapidly, even when compared to other cancer cells and have an active version of telomerase during cell division. The telomerase prevents the incremental shortening of telomeres that is implicated in aging and eventual cell death. Apparently it all started with explants cell cultures.

What is an explants culture?

The isolation of cells from a piece or pieces of tissue to create a cell culture is called an explants culture. Sources of tissue to harvest the cells can be a portion of the shoot, leaves, or some cells from a plant, or any part of animal tissue. Usually the tissue is harvested under aseptic conditions, often minced, and pieces are placed in a cell culture dish containing growth media. If the culture is successful progenitor cells will migrate out of the tissue onto the surface of the dish which allows further expansion of the primary cells and their transfer into fresh cell culture dishes. However, sometimes an “Explant culture” can also refer to the culturing of the tissue pieces. In this case cells are left in their surrounding extracellular matrix to more accurately mimic the in vivo environment as is the case when studying cartilage tissue.

What is a cell culture?

In a cell culture cells are taken from tissue similar to an explants culture and are grown under controlled conditions usually outside their natural environment such as in petri or cell culture dishes. The term “cell culture” refers to the culturing of cells derived from cell tissue either from animal (mammalian) cells or other cell types such as from plants, fungi, microbes, bacteria and many others. The development and the use of cell cultures are intimately intertwined with the development and use of tissue and organ cultures. The use of mammalian cell cultures became a common technique in the 1900s however, it all started in the 19th century. Cell cultures, mostly in two dimensions, are now routinely used in many laboratories. Attempts to develop cell cultures that can be used in three dimensions (3D) are in progress and are becoming more relevant to human and animal physiology. The development and use of 3 D cell culture systems can vary widely and may include engineering cell tissues for clinical delivery or the development of models for drug screening.

What is a cell line?

A cell line is a selected developed cell culture. In the twentieth century cell cultures were developed from their infancy, both, using plant and mammalian cells to provide a vehicle for viral vaccine production and most recently for the production of proteins such as recombinant proteins, monoclonal antibodies and other proteins useful for research purposes and as therapeutic drugs.

What is an immortal cell line?

Each time a cell divides, some parts of the ends of the DNA strands, the telomer ends, in the chromosomes can be cut off. After a certain number of cell divisions some pieces of DNA will be cut off at one end that are very important for the cells to survive. This may cause the cell to stop working correctly or even die. A biologically immortal cell line is able to divide indefinitely which theoretically allows the cell to live forever. An immortal cell will need to have a mechanism to avoid this kind of damage. Cancer cells as well as stem cells and many others cells have this ability. Even though an immortal cell lineage could continue to divide forever, any disease or other kind of damage could still kill it.

What is a stable cell line?

Stable cell lines are now extensively used in drug discovery. These types of cell lines can contain infected or transfected cells. The cell is called stable when the foreign piece of DNA has incorporated itself into the genome of the cell. The use of eukaryotic vectors for the incorporation of the selected genes allows for the engineering of stable cell lines. After successful transfection and selection of the cells they now contain the genetic information for the incorporated gene or genes that can either exist autonomously in the cytoplasm or as part of a chromosome. Depending on the on the type of gene expression and the gene construct, plasmid, used there are many different approaches for establishing stable cell lines. Sometimes the incorporation of the foreign DNA will not last and the cell has thrown that part of the DNA out becoming unstable again. Cell lines expressing  G-protein coupled receptors (GPCR) or a reporter gene are used for cell-based compound screening experiments. Typically, a stable cell line is created by transfection with a plasmid encoding the target of interest or reporter gene construct, and an additional gene which allows for chemical selection of successfully transfected cells (usually an antibiotic resistance gene). A lengthy selection process and a subsequent limiting dilution protocol is used to obtain the desired clones. As a result the desired stable cell line is generated. This is a time consuming process. Many stable cell lines are now commercially available.

A Short History of the Development of Cell Cultures

Cell line authentication and identification is similar to paternity testing

Cell lines can be efficiently and effectively tested similar to the determination of paternal origin of humans using multiallelic variable number of tandem repeat (VNTR) polymorphisms. This can be achieved by using multilocus DNA fingerprinting probes or batteries of single-locus minisatellite probes, or by PCR testing of sets of minisatellite and microsatellite loci. The genetic information of these hypervariable loci is so high that paternity disputes can now be resolved with certainty in virtually every case.