Home › Bioanalysis › How can MicroRNAs be descriped?

How can MicroRNAs be descriped?

Since hundreds of human miRNAs and thousands across other species have been identified, a system of nomenclature has been adopted and names are designated to specific miRNAs before publication of their discovery. Foe annotation experimentally confirmed microRNAs are given a number that is attached to the prefix mir followed by a dash, for example “mir-123”.

It is possible for miRNAs at different loci to produce the same miRNA and these are shown with an additional number, for example “miR-1-1 and miR-1-2”.

Strictly speaking, microRNA nomenclature should also be preceded by the annotation for the species they are observed in, for example in “homo sapiens = hsa-miR-xxx”. 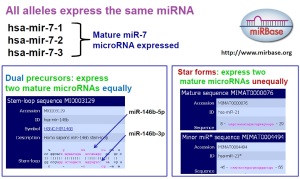 Primary features of the nomenclature scheme used in the miRNA base database are (http://www.mirbase.org/🙂

Note: The miRNA hsa-miR-369-3p is linked to targets involved in cell cycle and mitotic spindle organization and has been found to be misregulated in some cancers and in Alzheimer disease.

A paper that links the upregulation of hsa-miR-369-3p to lung cancer:

Small non-coding microRNAs (miRNAs) contribute to cancer development and progression, and are differentially expressed in normal tissues and cancers. However, the specific role of miRNAs in the metastatic process is still unknown. To seek a specific miRNA expression signature characterizing the metastatic phenotype of solid tumours, we performed a miRNA microarray analysis on 43 paired primary tumours (ten colon, ten bladder, 13 breast, and ten lung cancers) and one of their related metastatic lymph nodes. We identified a metastatic cancer miRNA signature comprising 15 overexpressed and 17 underexpressed miRNAs. Our results were confirmed by qRT-PCR analysis. Among the miRNAs identified, some have a well-characterized association with cancer progression, eg miR-10b, miR-21, miR-30a, miR-30e, miR-125b, miR-141, miR-200b, miR-200c, and miR-205. To further support our data, we performed an immunohistochemical analysis for three well-defined miRNA gene targets (PDCD4, DHFR, and HOXD10 genes) on a small series of paired colon, breast, and bladder cancers, and one of their metastatic lymph nodes. We found that the immunohistochemical expression of these targets significantly follows the corresponding miRNA deregulation. Our results suggest that specific miRNAs may be directly involved in cancer metastasis and that they may represent a novel diagnostic tool in the characterization of metastatic cancer gene targets.

A paper that links hsa-miR-369-3p to Alzheimer:

The oxidized LDL receptor 1 gene (OLR1) rs1050283 single nucleotide polymorphism (SNP) has been previously shown to be associated with Alzheimer’s disease (AD). An association analysis of OLR1 was carried out in a population of 443 patients with AD as compared with 393 age-matched controls. In addition, an expression analysis of OLR1 and its regulatory hsa-miR369-3p was performed in peripheral mononuclear blood cells (PBMC) from 20 patients and 15 controls. Logistic regression analysis, adjusted for gender and apolipoprotein E (ApoE) status, showed a statistically significant association of OLR1 rs1050283 under the assumption of a dominant model (CC and CT individuals versus TT: p = 0.014, OR: 1.50, 95%CI: 1.08–2.08) and a genotypic model (TC versus TT: p = 0.002, OR: 1.61, 95%CI: 1.14–2.26). No significant differences in OLR1 expression was observed between patients and controls (p > 0.05). However, stratifying patients according to the rs1050283 status, significantly decreased relative PBMC expression levels of OLR1 were observed in carriers of CC+CT genotypes as compared with TT carriers (0.13 ± 0.013 versus 0.46 ± 0.028, p = 0.022), whereas no differences in relative expression levels of the hsa-miR369-3p were observed (p > 0.05). The effect observed was not due to the presence of the ApoE ε4 allele. The OLR1 rs1050283 SNP likely acts as a risk factor for sporadic AD. The presence of at least one C allele is associated with a decreased expression of OLR1 mRNA in the absence of hsa-miR369-3p de-regulation, suggesting that the presence of the polymorphic allele influences the binding of hsa-miR369-3p to its 3’UTR consensus sequence. Nevertheless, the limited power of the study requires further investigations with a larger sample size.